Posters warn nitrous oxide users to be aware of the law

Posters warning that using laughing gas is no laughing matter are being put up around the district to deter users. 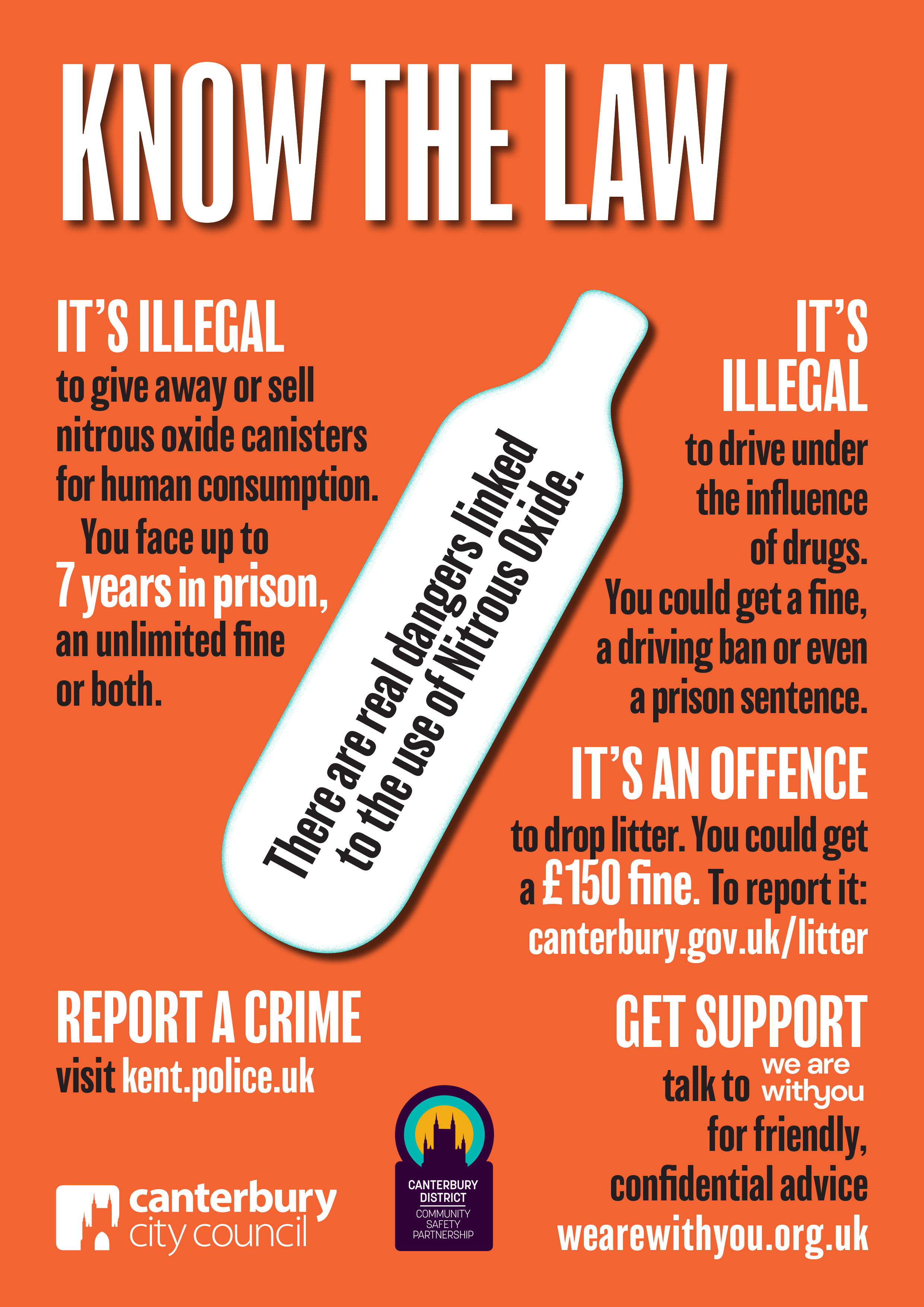 The nitrous oxide poster is going up across the district

Piles of the small silver canisters which once contained nitrous oxide, or NOS, are being left along the coastline and in Canterbury City Council-controlled open spaces and play areas.

Typically users fill balloons with the gas so they can then inhale it in the hope of feeling euphoric.

But selling or giving away the canisters, the contents of which are regarded in law as a psychoactive substance, can attract up to seven years in prison, an unlimited fine or both if caught by the police.

Being spotted by the council’s Enforcement Officers leaving canisters behind as litter will land the perpetrator with a £150 fine.

Council Leader Cllr Robert Thomas said: “Those using NOS canisters need to understand that what they are doing is illegal, can be really bad for their health and, ultimately, incredibly dangerous.

“And if they are caught leaving the canisters behind as litter, they can be hit in the pocket too.

“Why should parents be confronted with this type of substance abuse when taking their children to the beach or the playground and why should council taxpayers be forced to foot the bill for cleaning them up?

“We hope these posters will educate users about the law and help act as a deterrent.”

If you suspect someone is supplying nitrous oxide canisters, you can report it to the police or anonymously via Crimestoppers.

Inspector Guy Thompson said: “The misuse of nitrous oxide, which can cause long-term health problems, has had a negative impact on the community due to its links with antisocial behaviour and the littering of empty canisters.

“Nitrous oxide is classed as a psychoactive substance and it is therefore a criminal offence to supply it to someone else. We will not hesitate to take action against anyone suspected of supplying it to others.

“We strongly encourage anyone affected by antisocial behaviour caused by the misuse of nitrous oxide and other substances to report it to us either online or by calling 101.”

The posters have been designed with the help of the We Are With You charity which can offer confidential help and advice.

The council is in the process of reviewing its Public Spaces Protection Orders and is asking the public for its views including whether NOS canisters should be banned.